For the past several months things have been moving around Sculpture Fields at Montague Park in Chattanooga. Specifically, dirt.  Lots of dirt. Over 2000 dump truck loads of fill (20,000 cubic yards) have been shipped in to the park and formed into berms and mounds. This ‘phase one’ part of the project is expected to include 2000 additional truckloads of dirt to finish the landscaping in the next few months.  On November 18, there was a groundbreaking ceremony that included the Board of Directors of Sculpture Fields, several local politicians, as well as other fans of the arts.  On the coldest day of the year (it’s early yet, but it was pretty cold for the average Southerner) the ceremony was complete with speeches by John Henry (the park’s founding member), the Mayor’s office, and other brave and hearty souls. Everyone that participated even got their own souvenir hard hat and shovel. 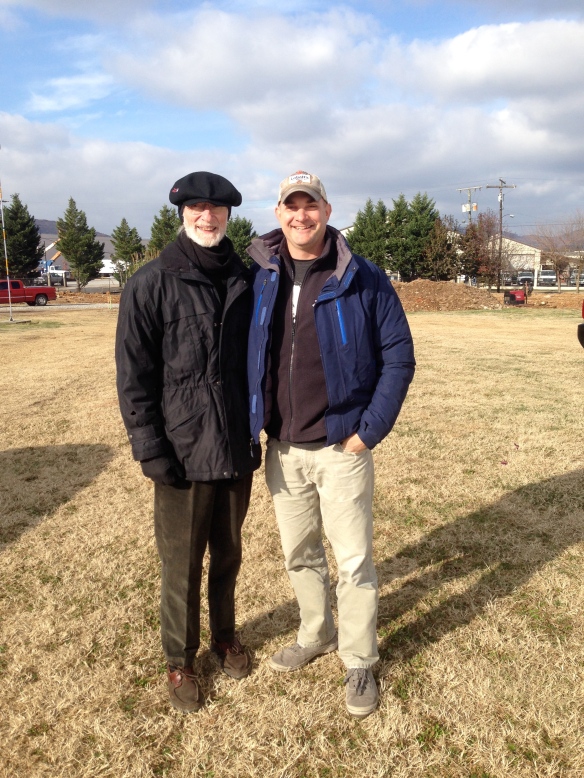 Distinguished dignitaries came from all over the state! 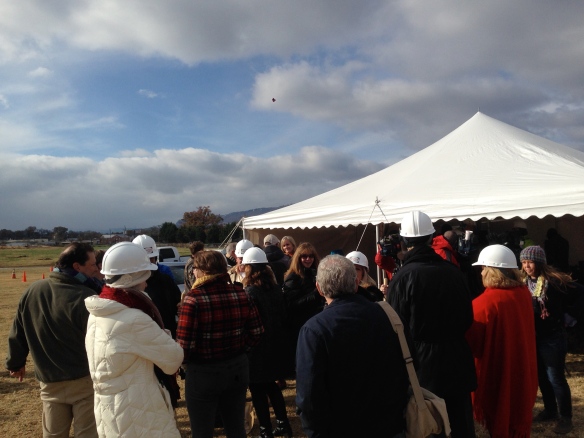 when they break out the hardhats, you know things are moving along 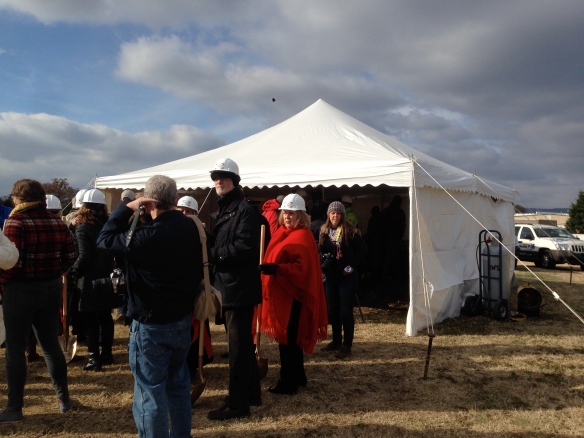 the tent had a heater, so that was a popular place…

As an active participant in the park, I was invited to come help with the dirt construction a week earlier.  I came down for two days and helped direct and count dump truck loads of dirt, which was not the most glamorous of jobs, but it gave the regular crew a break so that they could do other tasks. 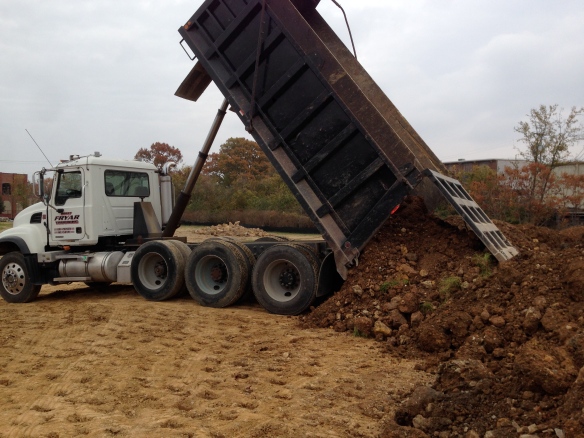 On the days I worked, they were running 5 dump trucks with a turn-around time of 20 minutes each.  Last month, at peak, they were running 14 dump trucks, so there was a truck every 2 minutes or so. In my short tenure, though, there was a lot of down time on the job in between truck loads.  For part of this down-time, I was able to pick rocks out of the topsoil (which brought up a whole host of childhood memories) and the rest of the time I got in some pushups (a great way to stay warm).  I remember growing up on our farm in Nashville and having to ‘rock’ the garden (we had about an acre of garden) which involved picking out rocks from the tilled soil before we planted. As a perfectionist in many ways, this was absolutely not the job for me. I couldn’t ever decide at which point the size of the rock was too small to remove from the garden or leave in the ground. While my brother, untroubled by the paralyses of indecision, would clear most of the garden of rocks, I would clear only several square feet (but they would be the cleanest section of the garden, by far).  While I did pick up a few boulders, John Henry’s sculpture crew did most of the work with the top soil culling, allowing me to concentrate on personal fitness (I managed to get in 500 pushups on Friday).

There were two bulldozers (one big, one small) running during the time I was there.  The large bulldozer was for leveling out the large mounds of dirt from the trucks, and the small one seemed to be for finesse work to shape the berms and grade the tops.  There is something that brings the little boy out in me when I get close to that kind of heavy machinery, so it was exciting to be playing in a giant sandbox.

A.J., the general contractor assured me though, once you’ve been on a bulldozer for 15 years or so, it kind of gets to be rote (not his exact words, but you get the drift).  The dirt mounds were being built in layers where trucks would dump piles of dirt, the large bulldozer would come by and level them, and then the compactor would roll back and forth over the top. To me, the compactor looked like a giant meat tenderizer driving up and down huge steak-shaped lumps of dirt.  Or, maybe I was just hungry…

The meat tenderizer broke, so there was a torch involved…

Speaking of food, the dressing for the berms was put in place using a large front-end loader. This was the most popular machine of the day, because it had a heated cab. John Henry and his grand-nephew Henry split time picking up loads of topsoil and spreading them out over the newly compacted and manicured berms. 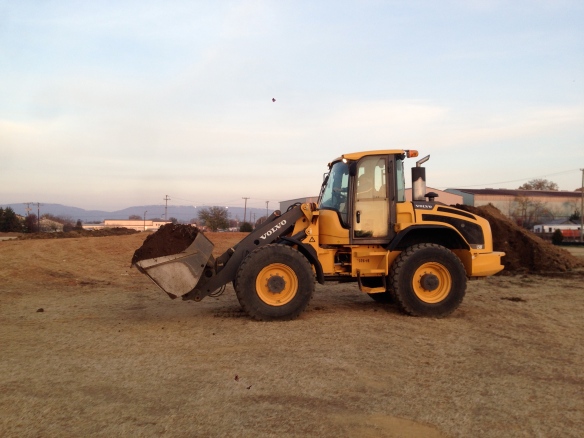 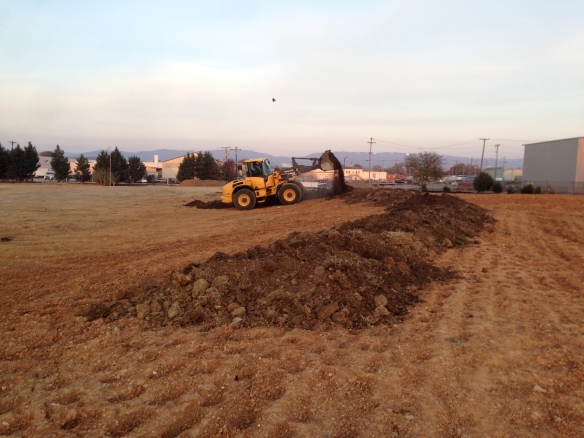 topsoil waiting to be spread

Large berms throughout the park will create a nice sense of flow for the visitors as they explore the area. There is a sense of wonder that happens when one crests a hill and discovers more sights and sounds are to had beyond what was originally seen. I think this approach will work very well for the layout of the park, and it will keep visitors excited as they tour the sculptures. It will also help manage the traffic and keep things moving in some sort of orderly fashion.  I can’t wait to see it all finished with vegetation grown in and other planned features next spring.

View to the north from large berm

atop the 9′ berm. Hard to tell, but it is pretty slope-y. Broken truck in background for scale…

In all, it was a great experience to be a part of such an innovative and rewarding endeavor. I believe when the park opens in the spring it will be a great destination for the city of Chattanooga, but also a draw for art enthusiasts all over the country.  The monumental scale of sculpture that is planned to be displayed will be very exciting to see, even for the casual art goer. 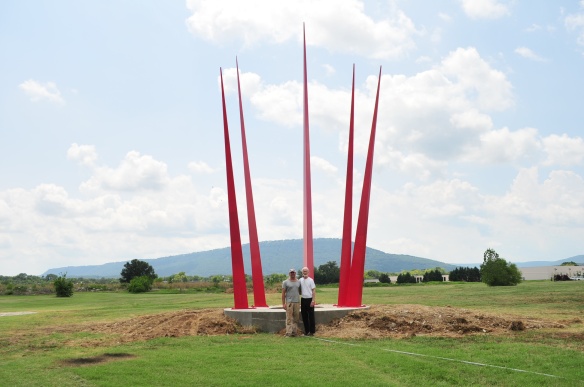